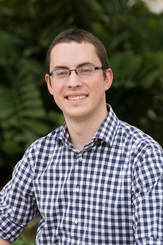 The KC Metropolis wrote that Jacob Hofeling's playing “had a wonderful variety of registers and colors an displayed a secure sense of control.”
A native of Arizona, Jacob has a Bachelor of Music degree from Arizona State University in Organ Performance, where he studied under Kimberly Marshall, Goldman Professor of Organ. At ASU Jacob had the opportunity to perform in a number of venues for different  occasions. He has performed as part of the Phoenix Youth Rising concert series as a featured young organist for two years. As part of the degree for ASU, Jacob has performed a number of solo recitals on the fabulous Fritts organ at Arizona State. Additionally, Jacob has extensive experience as a chamber musician, accompanying works on organ, harpsichord, and piano in a variety of styles and genres. In November of 2014, he had the great opportunity to perform the organ part to Respighi's Pines of Rome with the ASU Symphony Orchestra.
Jacob's music has also been recorded for use on radio at KBAQ in Phoenix, Arizona. Jacob holds a Masters Degree in Organ from the University of Kansas. Currently, Jacob is a graduate student at the University of Kansas, pursuing his Doctorate of Musical Arts in Organ and Music Theory. He studies under Dr. James Higdon, Dane and Polly Bales Professor of Organ, and head of the Division of Organ and Church Music at KU. Jacob has had experience in organ competitions and was recently selected and competed as a finalist in the Mikhael Tariverdiev Organ Competition in Kaliningrad Russia, and he was awarded second prize in the Fort Wayne, Indiana, National Organ Competition.
Jacob spends a great deal of time involved in his organ studies, as well as organ improvisation, composition, and arranging. Jacob's interests range far and wide. As a musician, he enjoys the music of other cultures, and has lived for a number of years in Eastern Europe. He is fluent in four languages and enjoys learning to speak and understand others.